Formula One Wold Championship is the highest class in formula racing. Special racing cars are made and developed whit open wheel arches. Abu Dhabi wanted to participate in the highest class and had a circuit specially made for this race. Every November, the Abu Dhabi Formula 1 Grand Prix takes place at the Yas Marina circuit in Abu Dhabi. This special circuit in the United Arab Emirates is located half an hour’s drive from the city of Abu Dhabi and no expense has been spared in construction. The sheiks of the oil state have had a completely new island built and a Monaco-shaped circuit built on it. A big part of the circuit is located along the marina and runs past the spectacular Yas Marina Hotel. Even a part of the circuit itself passes under the Yas Marina hotel! All this makes for spectacular pictures and fans of formula 1 and motorsport should not miss a visit to the Yas Marina circuit.

There are different grandstands on the circuit, which are all covered, not a luxury when you consider that temperatures in Abu Dhabi can rise to well above 40 degrees in the summer. Fortunately, the Formula 1 race is held in November and the temperatures in that month are considerably lower.

Substantial investments have been made in covered grandstands and light installations so that the race starts in daylight and finishes when the sun has set. This guarantees spectacular images and an unforgettable experience! Even more spectacular is the fireworks show that starts as soon as the finish flag is waved.

For the Formula 1 race on the Yas Marina circuit, various tickets are for sale for a large number of grandstands along the circuit. You don’t have to worry about sitting in full sun all day, all grandstands on the Yas Marina circuit are covered so you can enjoy the action on the track in the shade. The grandstand tickets for the race are not cheap by the way, count on prices that start at 400 euros for a weekend ticket, tickets for only Saturday & Sunday or only Sunday are slightly cheaper than a weekend ticket. If you want to attend the Formula 1 race as cheaply as possible, you can buy a ticket for the uncovered pitches.

Free bonus
Those who have bought a ticket for the Formula 1 race via the official website will receive a bonus in the form of free entrance to the Ferrari World park and the Yas Waterworld water park, which are both close to the circuit. Just before the race weekend, famous artists will be announced so keep an eye on the Yas Marina circuit website

Anyone who has bought a ticket for the race via the official website of the Etihad Airways Abu Dhabi Grand Prix will receive a promo code with which you can download the Formula 1 app for Android or iPhone for free. Normally, this app costs 26.99 euros for a year.

Weekend grandstand ticket holders are allowed to enter the pit lane on Thursday during the Pit Lane Walk where you get the chance to get very close to the Formula 1 cars. There are always a few drivers to spot signing autographs during the Pit Walk. Keep in mind that the Ferrari and Mercedes pits can be very busy. 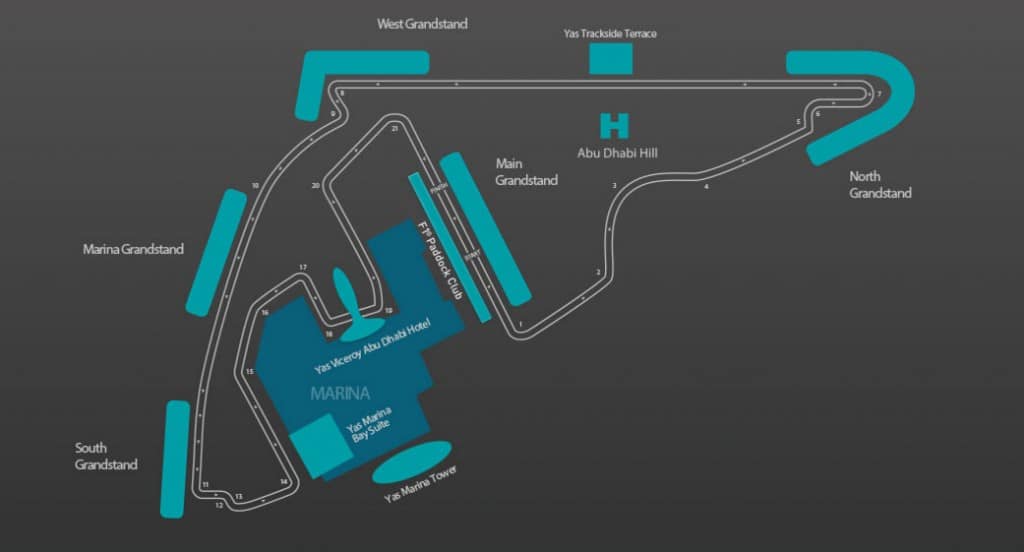 Below is a description of which grandstands there are and where are they located.

Main Grandstand
The Main Grandstand is located on the straight where the last race of the season will start on Sunday. Anyone who has a ticket for this grandstand is seated first rank at the start of the race and has a good view of the pit lane where the drivers regularly change tires during the race. You also have a view of a large TV screen from the Main Grandstand so that you don’t miss any of the action further down the track.

Before the race, you can see the drivers doing their installation laps from this stand, after which they drive their cars to the grid and prepare for the start of the race for half an hour. During the grid walk, many celebrities walk past the cars which you can spot with a bit of luck. After the race, the Main Grandstand offers a perfect view of the podium where the winner will be honored.

The prices for tickets for the Main Grandstand start at 2200 AED for a weekend ticket which is valid from Friday to Sunday. Tickets can be booked via the official website of the Etihad Airways Abu Dhabi Grand Prix.

North Grandstand
This huge grandstand stands at the sharp 90 degrees at the northern tip of the circuit. From this grandstand you have a view of the Formula 1 cars that arrive at the bend at full speed and have to apply full brakes to reach the bend. This corner is one of the points where the drivers regularly brake their predecessor and thus move one place forward. This grandstand is closest to the Yas Arena, where the After Race concert takes place after the race and this grandstand is also almost adjacent to Ferrari World.

The prices for tickets for the North Grandstand start at AED 525 for Friday only, for a weekend ticket you pay AED 2080. Tickets can be booked via the official website of the Etihad Airways Abu Dhabi Grand Prix.

West Grandstand
This L-shaped grandstand can be found in the western corner of the circuit, at the end of the long straight of the circuit. The drivers arrive at this grandstand at over 300 kilometers per hour and the bend just in front of the grandstand is therefore a popular point for the drivers to overtake their predecessor. Especially thanks to the DRS you will see many overtaking actions here and hopefully it shows some beautiful overtaking maneuvers here.

Prices for the West Grandstand start at AED 525 for Friday and AED 2080 for a weekend ticket valid on Friday, Saturday and Sunday and the pitwalk on Thursday. Tickets can be booked via the official website of the Etihad Airways Abu Dhabi Grand Prix

South Grandstand
The South Grandstand, as the name suggests, is located at the southern tip of the circuit. This grandstand has a magnificent panoramic view over a large part of the circuit. The grandstand offers a good view of the chicane at turns 11, 12 and 13 and you can also see turn 14 in the distance, the drivers disappear at high speed towards the striking five star Yas Viceroy Hotel.

The South Grandstand grandstand is divided into a Lower and Upper section, but the prices for the South Grandstand Lower and Upper are the same. Prices start at 1875 AED for a ticket for Saturday + Sunday, for a weekend ticket that is valid from Friday to Sunday (and on Thursday for the pit walk) you have to pay 2080 AED. Tickets can be booked via the official website of the Etihad Airways Abu Dhabi Grand Prix.

Marina Grandstand
The Marina Grandstand is located on the straight in the southwestern part of the circuit. The grandstand is built on top of the pits of the supported racing classes such as the GP2 and the Porsche Supercup. From this stand you have a wide view over the marina and the five-star Yas Viceroy Hotel.

Prices for the Marina Grandstand start at 1875 AED for tickets for Saturday + Sunday, for a weekend ticket that is valid on Friday, Saturday and Sunday and the pitwalk on Thursday you pay 2080 AED. Tickets can be booked via the official website of the Etihad Airways Abu Dhabi Grand Prix.

Abu Dhabi Hill
Do you want to attend Formula 1, but don’t feel like spending more than 400 euros on grandstand tickets? Then the Abu Dhabi Hill is the spot for you, this large grass field in the middle of the circuit is specially designed for standing places and thanks to the high location you have a good overview from here over turn 2 to turn 6 of the circuit.
The Abu Dhabi Hill is opposite the North Grandstand and on the longest straight of the circuit giving you a good view of the point at the end of the straight where there will be a lot of overtaking thanks to the DRS zone. 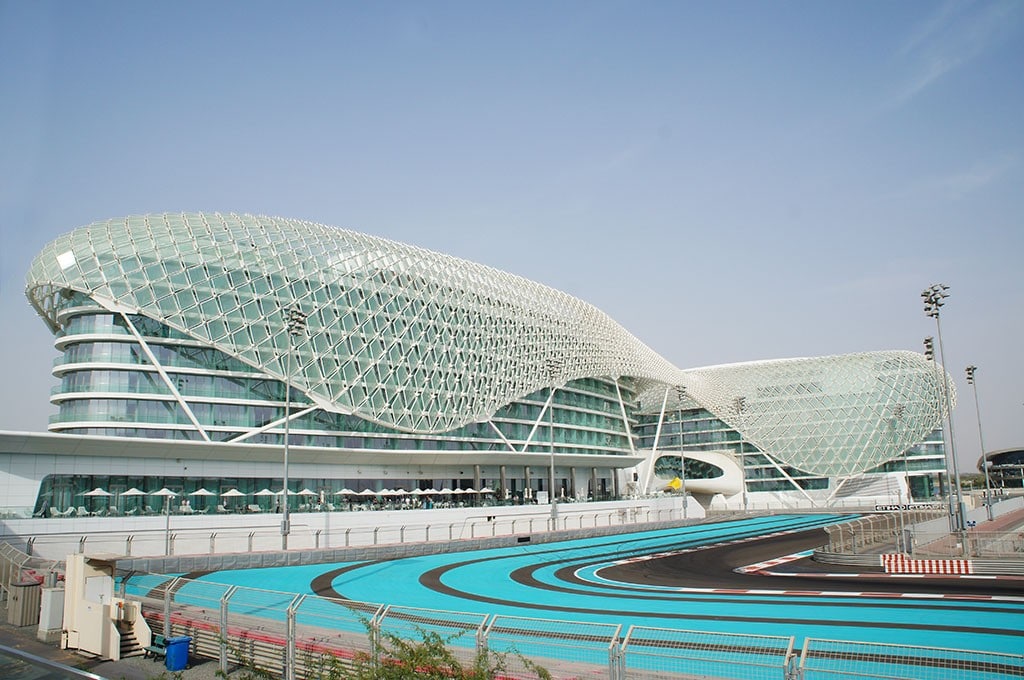 Do you want to be present at the Formula 1 race in Abu Dhabi and encourage your own favorite team or driver that is possible. For the race in Abu Dhabi tickets are available, from cheap standing places to super-deluxe grandstand seats in one of the covered grandstands or lounges on the straight. Be on time because the tickets can sell out quickly.For more information about the tickets, visit www.yasmarinacircuit.com or www.formula1.com.

Anyone who has a weekend grandstand ticket can do the Pit Lane Walk for free on Thursday. You will receive a special ticket for this with your weekend card. During this walk through the pit lane you will have the chance to admire the Formula 1 cars up close and often there are some drivers signing autographs. The teams are regularly practicing in the pitwalk with changing the tires so that you can experience this special spectacle up close.

Saturday
On Saturday there is the third free practice session in the morning where the drivers get the last chance to prepare their cars for qualifying.
At the start of qualifying, the 22 drivers will compete for that coveted pole position. First, all 22 drivers in Q1 get the chance to set a time. After 18 minutes Q1 stops and the slowest six drivers are eliminated and the remaining drivers are allowed to continue to Q2 which lasts 15 minutes. After Q2, the six slowest drivers will again be eliminated and the best 10 will compete for pole position in Q3. This lasts 12 minutes and after 10 minutes the flag falls and we know who can start the race from first place on Sunday.

In addition to Formula 1 training and qualifying, training and races will also take place on Saturday in the supported racing classes of the GP2, GP3 and Porsche Supercup.

Sunday
On Sunday the lights will turn green and the Etihad Airways Abu Dhabi Grand Prix will start. In total, the drivers have to drive 55 laps on the 5.5 kilometer circuit, covering a total of 305.355 kilometers. After a little more than 1.5 hours, provided there is no safety car on track, the finish flag falls and we know who won the last race of season and who can officially call themselves world champion Formula 1.

Before the start of Formula 1, there are still races of the GP2, GP3 and Porsche Supercup. The drivers also pass by on a truck during the parade lap before getting into their car.

Since the first race in 2009, several drivers and teams have won the Abu Dhabi Grand Prix. Strangely enough, Ferrari has never managed to win on the Yas Marina circuit. Leader in the standings when it comes to victories is Lewis Hamilton, he won the race in 2011, 2014, 2016, 2018 and 2019 in the Mercedes. Remarkably enough, last year Max Verstappen won the race on the Yas Marina circuit, where in previous years it was a real Mercedes party with 6 victories in a row. 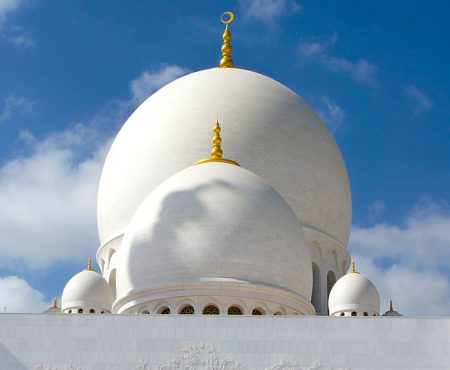 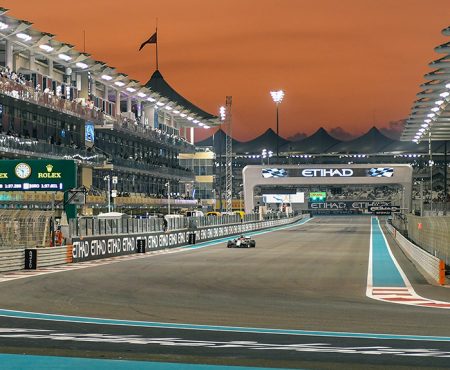 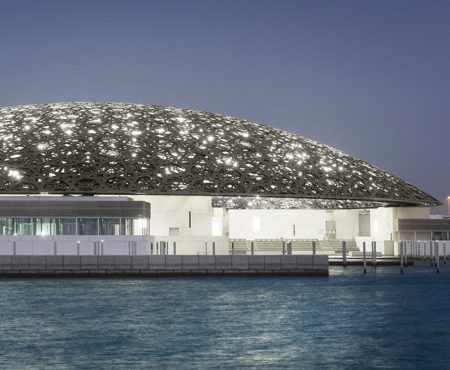 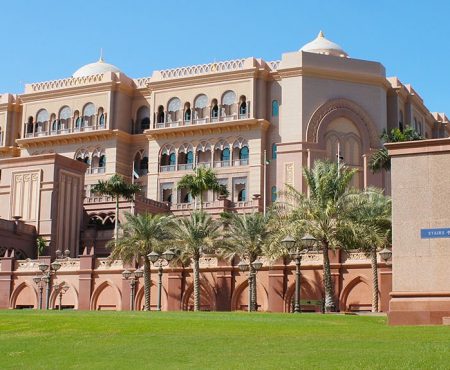