Dubai has an unmanned metro system that allows you to cross a large part of the city quickly and cheaply. Dubai’s sights lie particularly around Sheikh Zayed Road and the metro lines. This is why the metro is the ideal way to explore Dubai.

The subways run 7 days a week from early in the morning until midnight. The start time and end time depend on the metro line. The exception is Friday, on this day the subways start running at 10 a.m. See the timetable below for the complete timetable of the two metro lines in Dubai. The subways run every +/- 8 minutes from the Rashidiya metro station (near Dubai International Airport) along the busy Sheikh Zayed Road highway towards Jebel Ali (UAE Exchange station).

Thanks to their striking architectural style, the metro stations can often be recognized from some distance. Almost every metro station has multiple exits on both sides of the road so that you can quickly go in various directions from the metro station. The metro stations at the Dubai Mall and the Mall of the Emirates are connected with the malls thanks to an air conditioning bridge. You can easily walk into the mall from the metro without first having to go outside, especially in the summer months when the temperature is well above 40 degrees this is very pleasant.

Plan your journey with the Dubai Metro

Do you want to plan a route in Dubai with the metro or bus? Then you can use the Wojhati website or app. This is the official route planner app of the RTA. RTA is the organization that arranges all public transport in Dubai. With the Wojhati Journey Planner app you can easily and quickly plan your route from A to B.

The download links of the various app stores such as the Apple App store or the Google Play for Android phones can be found on this page. Click on one of the icons of your operating system to download the app via the marketplace.

The Dubai metro has two lines, a red and a green line. The red line is mainly above the ground and continues further from the BurJuman station below the ground and comes to the surface again at the GGICO metro stop. The green line is mainly underground and runs only between the Salah Al Din up to the Etisalat terminus. Between Burjuman and the Creek terminus the metro runs above ground. All stations have an Arabic and English name as well as a number so that you can easily remember the stations.

Red line
The red line has a length of 52 kilometers and has a total of 29 stations, some of which are currently closed. Well-known metro stations on the red line are the station at the Burj Khalifa / Dubai Mall, the Mall of the Emirates and the DAMAC properties station. The DAMAC properties station is near the Dubai Marina and from here you can quickly walk to the Jumeirah Beach Walk.

The stations Jumeirah Lake Towers and DAMAC properties have a direct connection to the Dubai Tram. You can easily walk to the tram to travel further to the Beach or the monorail station for Palm Jumeirah.

From January 1, 2021, the new extension of the Dubai Metro will be open. The “Route 2020” extension built for the Dubai Expo includes 3 new stations + a converted station. The new metro line in Dubai has a total length of 15 kilometers and is largely above ground, and also has two stations that are underground. In total, the line is 11.8 kilometers above the ground and the route goes 3.2 kilometers underground.

The new route starts at the Jabal Ali metro station (formerly known as the Nakheel Harbor and Tower station) which is on the red line and runs through the Dubai Expo 2020 site. The new line will run through a number of popular areas such as Dubai Investments Park, Discovery Gardens, Al Furjan and the Jumeirah Golf Estates.

The Jabal Ali station has become a transfer station since the opening of the new route. Since January 1, 2021, 4 stations of the route have been opened, the other 3 stations will follow at a later stage. In addition, there are a number of stations that may be added to the metro line in the future. At all new metro stations it is possible to transfer to one or more bus lines or to take a taxi at the taxi rank. 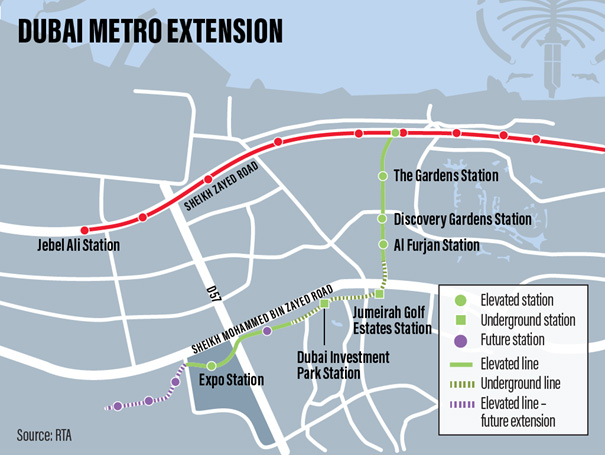 The Dubai metros run 7 days a week. The red and green lines have different services, below you can see exactly when which line starts and stops driving. The frequency with which the metro trains run varies between 6 to 9 minutes.

Particularly during rush hour, the coupes of the metro can be very full, which can be especially annoying if you have to travel longer parts with the metro. Fortunately, the metro also has a Gold Class coupe, where you can travel a lot quieter at a slightly higher price and are almost certain of a seat.

The Nol card
The most common way to travel by metro in Dubai is through the Nol Card. This card you purchase once and then can easily and unlimitedly charge at the counter or at one of the many ticket machines. Have you purchased a Nol card and is there still balance on the card when your holiday is over? You can have this balance paid out at one of the manned counters at the metro stations. Per card a fee of 5 AED is charged for paying out.

There are various types of NOL cards available, for the current information and rates we would like to refer you to our special page about the NOL card on our website or to the website of the NOL card: http://www.nol.ae.

Make sure you check in and out, if you forget this you can get a fine of 200 AED. At the metro stops it is almost impossible to walk outside without checking out, but there are no gates at the tram.

The Dubai metro is divided into four different zones: zones 1, 2, 6 and 5. The costs for a single journey with the metro depend on the number of zones you cross. If you stay in the same zone, the rate is lower than crossing two or three zones.