The man-made island Bluewaters Island is located off the coast of Jumeirah Beach Residence and the Dubai Marina The 1.2 billion dollar island is located about 300 meters from the coastline and is connected to the mainland by a overpass and a pedestrian bridge. The island is best known for the Ain Dubai, the huge Ferris wheel that stretches far above the skyline of the Dubai Marina. Besides the Ferris wheel which can be visited in 2021, there are over 150 shops and restaurants on the island.

Spread over the island are a couple of luxury hotel resorts of Caesars Palace, the famous hotel chain from Las Vegas. You will also find a beach club with three swimming pools on the island and from 2021 a new location of the famous Madame Tussauds wax museum.

What does the island have to offer?

The Bluewaters Island has everything to become the newest hotspot in Dubai. Especially when the Ferris wheel is opened in 2021, tens of thousands of visitors will visit the island every day. The island is divided into three main areas, a residential area where luxury apartments can be found together with a number of luxury hotel and resorts, a large shopping area and an entertainment area. 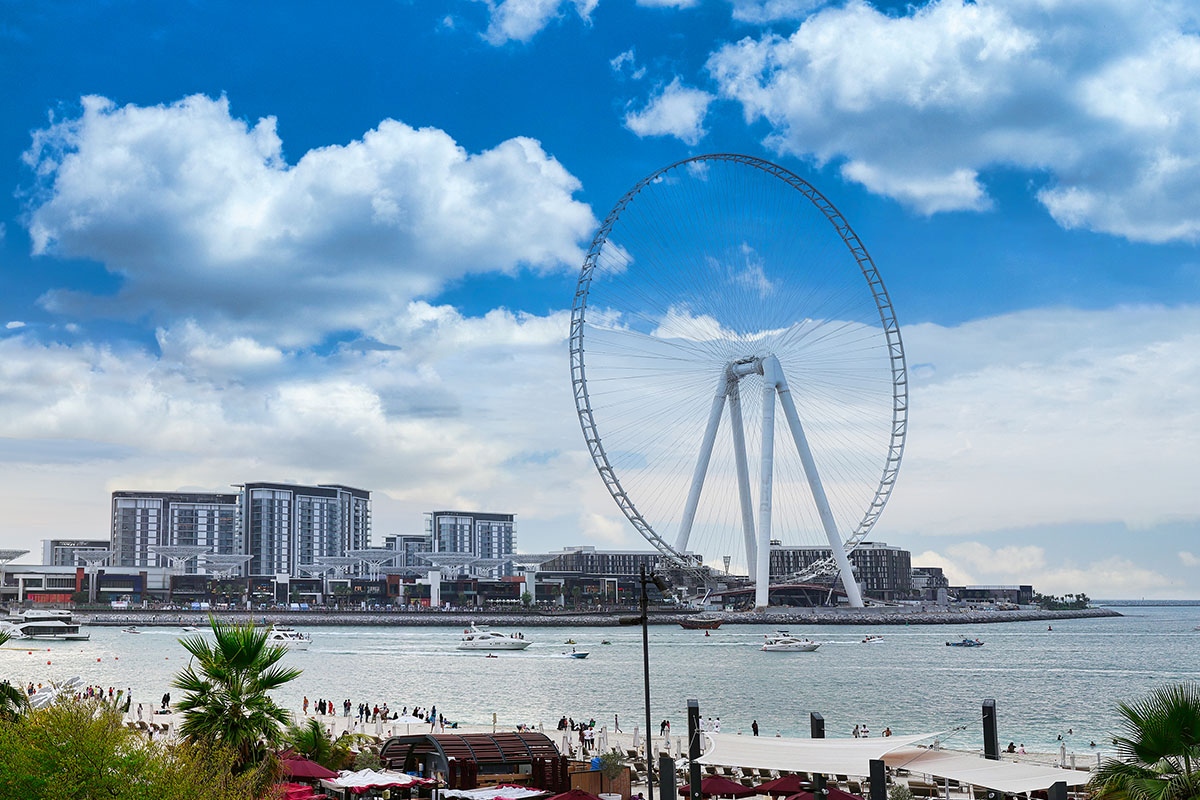 The Ain Dubai has a total of 48 capsules that are on the road for 45 minutes to make one round. In total, a maximum of 1,400 people can enjoy the view of Dubai in the Ain Dubai. Due to a unique design of the step-up platform, the roundness of the wheel is not interrupted, when new guests get in the wheel, the wheel just keeps running. Thanks to the enormous dimensions, the gondolas of the Ferris wheel are a true living room in themselves.

Each gondola can carry up to 40 passengers and offers a 360 degree panoramic view of the Palm Jumeirah island and the impressive skyline of Dubai. A number of capsules will also be provided with tables so that you can enjoy the view and dinner with up to 12 people at the same time. There are also six capsules with a bar so that you can enjoy a drink during your ride in the Ferris wheel. 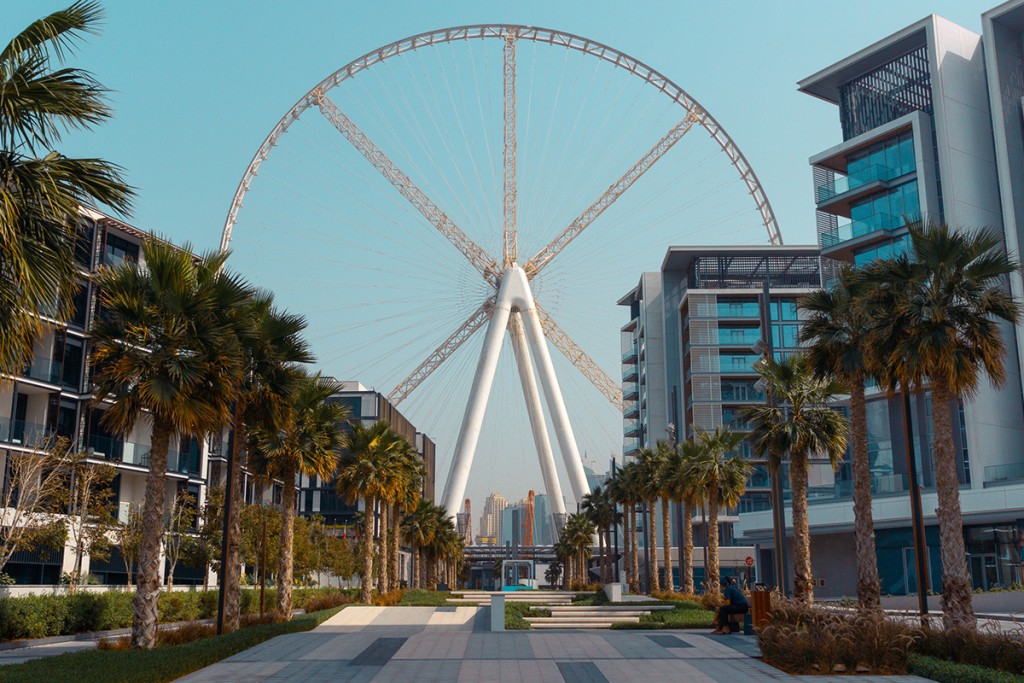 Everything has been thought about at the Ferris wheel. The wheel is capable of surviving heavy sandstorms and earthquakes are no problem for the Ain Dubai. The wheel is designed so that if the bottom shakes the wheel remains stable. During a possible earthquake, the Ferris wheel is even one of the safest places to be, according to the developers. Safety comes first and that is why every capsule has a double air conditioning if the first air conditioning fails. That’s nice as temperatures in Dubai can rise to 50 degrees in summer. For the air conditioning to run for a long time each capsule is equipped with an emergency generator if the power fails in Dubai.

An exact opening date for the Ain Dubai has not yet been announced, but it is almost certain that somewhere in the middle of 2021 the first visitors will be able to make a round trip with the Ferris wheel in Dubai. At the start of 2020, the capsules will be hung in the frame of the wheel one by one after which the test runs can begin. It is expected that every year 1 to 3 million people will make a ride in the largest Ferris wheel in the world.

In 2008 Madame Tussauds came with the news that the famous wax museum would open a branch in Dubai. It remained silent for a long time due to the economic crisis, but in 2016 the news came that a Madame Tussauds museum will be opened on the Bluewaters Island. An exact opening is not yet known, but people talk about 2021.

Madame Tussauds is world famous thanks to the many museums worldwide where you can admire wax statues of famous people, artists and athletes. After the opening of the first office of Madame Tussauds London, numerous locations have been added over the years, including in Amsterdam, New York and Singapore. From 2021, Dubai will also be included in the list of world cities with its own branch of Madame Tussauds.

It has not yet been announced who will be admired at the Madame Tussauds Dubai museum, but chances are that in addition to world stars, local celebrities, sports legends from the United Arab Emirates and historical icons including the rulers of the UAE and Dubai see.

The restaurants on the island offer a wide choice of menus with dishes from all over the world. From Italian to Arabic and from Japanese to Mexican, it can all be found on the Bluewaters Island. One of the new restaurants on the island is the Basanti & Co restaurant where you can enjoy Indian cuisine. Those who love burgers can go to the Ketch-Up bar which brings affordable American burgers to Dubai. Ketch-Up is originally a concept from Moscow and is known for its industrial design, delicious burgers and the healthy menu for those who do not feel like hamburgers. The trendy cafe L’ETO can also be found on the Bluewaters Island, the cafe already has two branches in Dubai in City Walk and the Dubai Mall Fashion Avenue.

On the Bluewaters island you can find two hotel resorts with their own beach club. Both resorts on the island are from Caesars Entertainment, a company mainly known for the Caesars Palace hotel and casino in Las Vegas. The hotels in Dubai are the first hotels in the hotel chain that do not have a casino.

The first resort on the island is the Caesars Palace Bluewaters Dubai hotel. This hotel is the second Caesars Palace in the world, the original hotel can be found in Las Vegas. The hotel has 194 rooms, an indoor swimming pool, two outdoor swimming pools, a luxury spa and health center and six different restaurants including the Hell’s Kitchen restaurant by TV chef Gordon Ramsay.

Besides the hotels, shops and restaurants, you can find also houses on the Bluewaters Island. On the island there are in total 698 apartments and 17 luxury villas to be found which all have private pools and a beautiful view. The apartments prices starting at 500,000 euros and up to several million euros.

How to get there

Accessibility Bluewaters Island
The Bluewaters island can be reached thanks to the overpass that connects the island to the mainland. From the Sheik Zayed Road you can easily travel to the island by car or taxi. In addition to the overpass, there is also a 265 meter long pedestrian bridge which connects The Beach and the JBR to the Bluewaters Island. From the bridge you have a magnificent view of the island itself and the skyline of the Dubai Marina with the JBR Beach in the forefront.

At the end of 2021 there will be another opportunity to travel to the island with the Group Rapid Transit (GRT), a modern transport system that will have to connect the island to the metro network of the city. For this system, Dubai went to look around in the Netherlands and eventually ended up at the company 2getthere. This Dutch company will develop the autonomous vehicles and transport systems that will connect Blue Waters Island to the rest of the city. The innovative system with self-propelled capsules / cars goes and gets transport capacity of up to 5,000 passengers per hour per direction. This will make the system the largest in the world of its kind. This new connection will therefore become a showcase for the future in the area of ​​autonomous transport.

For more information about the Bluewaters Island visit the website of the island: www.bluewatersdubai.ae.

error: Content is protected !!
Manage Cookie Consent
To provide the best experiences, we use technologies like cookies to store and/or access device information. Consenting to these technologies will allow us to process data such as browsing behavior or unique IDs on this site. Not consenting or withdrawing consent, may adversely affect certain features and functions.
Manage options Manage services Manage vendors Read more about these purposes
View preferences
{title} {title} {title}