Dubai is located on the Arabian peninsula known as one of the hottest places on earth. As a result, the emirate has a subtropical, warm desert climate. Thanks to this climate, almost the entire year the sun shines in Dubai. The sky is blue and the average temperature is around 25 degrees. Thanks to this desert climate Dubai has a guaranteed period of great weather and is therefore the ideal location for a beach holiday! With an average daily temperature of 27.5 degrees Celsius, Dubai is one of the warmest cities in the world.

The summers (mid-May to late October) in Dubai are dry, sunny and very hot with temperatures that can reach almost 50 degrees in the shade. The hottest months are July, August and September, in these months the mercury daily rises to temperatures above 40 degrees. In the evenings it hardly cools down and the thermometer still shows values ​​of around 30 degrees. An air conditioning in the summer is therefore a need in Dubai! It is therefore not surprising that part of the population and the expats escape from the emirate in these months to their homeland or the cooler Europe to celebrate holidays. The high temperatures in the summer months in combination with the high humidity of around 90% can also make it very stuffy during the day.

In the winter, which runs from November to the beginning of April, it is still fine in Dubai with an average temperature of 24 degrees. The winter period is by far the most pleasant season to stay in Dubai. It can rain in the winter period, but lucky the rain showers are short and it rains only 25 days a year in Dubai. The chance that you have half a holiday rain in Dubai is as good as impossible!

Who thinks of Dubai will not think of rain, rain almost never occurs in the desert. But even in Dubai you sometimes have to take the umbrella out of the closet because of a rain shower. In the summer months (mid-May to the end of October) you will not easily see a drop from the sky but during the winter season (from November to the beginning of April) there is a chance of rain. These are often small rain showers of a maximum of fifteen minutes to an hour.

The average annual rainfall is 89 to 95 millimeters, as this is an average year that there is considerably more rainfall from the air. There are even averages of far above 200 millimeters, this is quite unique for a country with a desert climate. Rainfall occurs on average 25 days per year in Dubai, this is a shower with at least 0.1 mm per day. A negative development is the fact that flooding in Dubai has increased considerably in recent years, mainly due to climate change. Because the infrastructure is not calculated for heavy rainfall, a heavy rainshower in Dubai quickly causes major nuisance in the form of flooded tunnels and roads.

The chance of hail is very small in Dubai, only once every 2 years is hail from the sky. Natural snow is impossible due to the high temperatures during the winter months. Those looking for snow fun in Dubai will have to move to the indoor ski run Ski Dubai which can be found in the Mall of the Emirates.

Dubai has a high humidity, the average highest humidity is between 82 and 92 percent, the lowest value is between 25 and 45 percent. The highest air humidity is measured during the winter period, in May is the lowest air humidity. The high humidity in the winter months can be seen during the day because a gray veil in the air. Sometimes it is more and sometimes less visible. Also in the mornings it is good to see that it can be very humid in Dubai, just after sunrise a city is covered with a thick blanket of fog which is quickly sunk as the temperature rises.

The UV rays in Dubai are very high, even in the winter months the sun has harmful rays. In the months of March to September the sun rays at its strongest and is 10 / 10+. So make sure that in sunny weather you are always well protected against the sun and blocking his UV rays. Wear sunglasses end use sunscreen with a high factor. Make sure that the sunscreen is reapplied frequently. Who does not do this will quickly experience that Dubai has a strong sun power.

Not all months are suitable to travel to Dubai. So you can best avoid the summer months July and August because of the extremely high temperatures above 40 degrees. Sometimes the thermometer even measure values ​​above 45 degrees and because of the high humidity and / or strong wind, the feeling temperature in the months of July and August can be around 50 to 60 degrees. In these months it is no fun to be out and the public life is very extinct. This is because everybody is as much as possible inside the cool air of the air conditioning. Summer has one advantage, because of the low number of tourists, the rates for hotels and rental cars are much lower.

If you are not a Muslim. It is also best to avoid the Ramadan period. During this period many bars and restaurants are closed during the day. It is not appreciated when you go out to eat or drink in public. Because the start of Ramadan has to do with the moon’s position, the month of fasting starts every year on a different day.

We think the period between the end of October and mid-May is the best travel period to travel to Dubai. The temperatures during the day and at night are very pleasant. The chance of rain is low and the number of sun hours is between 8 and 9 per day. Do you want to be sure of temperatures of around 30 degrees and the least chance of rain? Then it is best to avoid the period between the end of December and the beginning of March. The winter in Dubai has average temperatures around 24 to 26 degrees and there is an chance of rain. The average amount of rain that falls in the wettest months of January and February and March is less than 30 mm.

Do you have children and are you forced to go on a holiday during the school holidays? Then the best thing you can do is to choose the autumn or spring holidays to book a holiday to Dubai. During the Christmas holidays and New Year’s Eve in Dubai the prices of the hotels in Dubai are much higher. In this periode it also can be very busy in Dubai, especially on the tourist hot spots in the city. 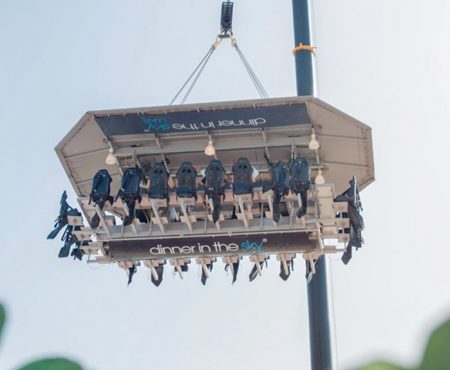 Dubai dinner in the sky