Umm Suqeim Beach is located near the famous Burj Al Arab hotel and offers a magnificent view of this special hotel. The beach of Umm Suqeim is also known as Sunset Beach due to the fact that this beach is a popular location to view the sunset in Dubai. This beach is the only beach in Dubai where you can make beautiful pictures of the sunset in combination with the Burj al Arab. So just before the sunset it can be very busy on this beach.

Facilities on the beach

Special is the fact that there is a beach library on Umm Suqeim beach where you can borrow free books to read on the beach or on the beanbags next to the library.

In Dubai it is forbidden to swim in the sea after sunset, but an exception applies to Umm Suqeim Beach. The Umm Suqeim beach is together with a number of other beaches in Dubai equipped with special “Smart Power” light posts which make it possible to swim in the dark on the beach. The “Night Swimming Dubai” project was launched in 2017 and has since its introduction become a popular activity not only for locals but also for tourists.

The 12 meter high light poles are located on the Umm Suqeim 1 Beach section which is about 1 kilometer from the Burj al Arab. The light towers are supplied with power via the solar panels and windmills on the piles which generate electricity during the day, allowing the piles to burn after sunset. The poles not only illuminate the beach but also a part of the sea. In total, an area of ​​125 meters of beach and 30 meters of sea is illuminated by the light poles. At midnight the light poles will automatically switch off and you will not be allowed to swim in the sea anymore.

How to get there

The beach has a limited number of parking spaces for which you have to pay. It is therefore best not to come to the beach by car but to opt for a taxi or public transport. The Big Bus hop on tour also goes along the beach so if you have a ticket you can also travel to this beach with the Big Bus.

In terms of clothing, the beach is very similar like a beach in the Netherlands, Greece or Spain. You see women with bikinis or bathing suits and men with short and long swimming shorts. The only difference is that in Dubai you also see women with burkini’s on the beach, while in Europe only sporadically occurs. Keep in mind that in Dubai it is not appreciated if you walk around with your beachwear outside the beach.
Beachwear is only meant for the beach. Do you want to visit the boulevard, visit a store or go somewhere to eat at a restaurant? Then put on your clothes again. 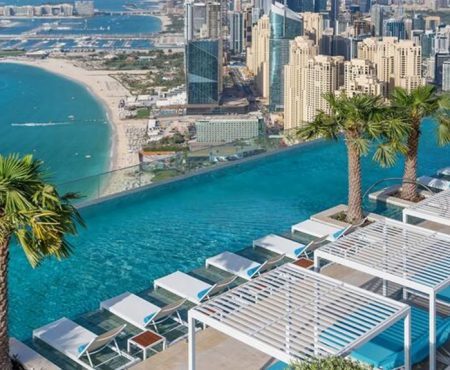