If you are on holiday in Dubai, you should of course eat and drink regularly during the day. You can of course go to the many restaurants in Dubai, coffee shops or at the fast food restaurants in the food courts of the shopping centers. But you can also go to the supermarket for your bottles of water, soft drinks, sandwiches and all sorts of other foods. Especially for bottled water, a quick visit to the supermarket is ideal for if you are thirsty. This is not only much cheaper, it is also a nice experience because the shelves of the supermarkets in Dubai are full of products that we are not used to in Europe.

Especially the smaller supermarkets in the older part of Dubai around the Dubai Creek and Deira are full of special products from India, Bangladesh and Pakistan. This is because many migrants who work in Dubai live in these neighborhoods and like to buy products from their home countries to cook local dishes.

In Dubai you will find a few huge supermarkets, also called hypermarkets. Next to the food and drinks, these hypermarkets also include electronics such as washing machines and TVs, clothing, shoes and household items. Most hypermarkets in Dubai can be found in the large shopping centers on the ground floor near the entrance to the parking garage. These supermarkets are known for their extremely long opening hours from early in the morning until late at night. A number of hypermarkets are open until midnight even on weekends.

Next to Carefour, the LuLu retail chain also has a couple hypermarkets in Dubai. Beside to the huge hypermarkets, there are also countless smaller supermarkets in Dubai, from medium to very small. The smallest supermarkets mainly sell “fast food” such as crisps, snacks, biscuits, chocolate and soft drinks. Products for self-cooking are often not found in these small supermarkets that sometimes do not exceed 7 by 7 meters. For this you really have to go to medium-sized or large supermarkets.

The medium-sized supermarkets in Dubai are mostly from the retail chains Spinneys, Geant, Waitrose, Hyper Panda and Choithram. Spinneys is a store chain that is mostly focused on Western expats with an assortment with plenty of Western products.

Product Range at the supermarkets

For those who really can not do without his favorite brands, soft drinks, cookies and chocolate you will be just fine in Dubai. Virtually all well-known brands such as Coca-Cola, Lays chips, Mars, Oreo and Milka chocolate are available in large and small supermarkets.

The vegetable departments of the hypermarkets are a joy to visit for food lovers. The most exotic fruits can be found, from passion fruit to the melon (kiwano) and a doerian to the sour bag (sourop).Is a fruit species unknown to you? You can of course buy one to taste it and that will make you an experience richer. Of course you can find the famous fruits such as bananas, apples, kiwis and oranges in the supermarkets of Dubai.

In addition to standard items such as fruit and vegetables, meat and bread, the large supermarkets also sell a wide range of imported products from countries such as Europe, America and Australia. For example, you can buy real Dutch Gouda cheese or mozzarella and ham from Italy without too much searching in many large supermarkets. And if you look closely in the large supermarkets, you will even find biscuits and waffles that have been imported from Belgium. The disadvantage of these imported products is that the prices are quite high in relation to those of the local products.

Despite the fact that the United Arab Emirates is a Muslim country and the sale of pork is officially prohibited, the supermarkets in Dubai do sell pork. The pork is in a closed section of the supermarket so that Muslims are not confronted with pork while shopping.

Those looking for alcohol in Dubai in the supermarket will return home disappointed. In fact, no alcohol is sold in all supermarkets in the United Arab Emirates, so you will not find a shelf full of beer and wine in Dubai. Yet you can buy beer in the supermarket, but it is alcohol free. A brand that represents strongly in Dubai in the alcohol-free beer beer is the Dutch beer brand Bavaria. Next to the normal alcohol-free beer, you can also get 0.0% beer with flavors of strawberry, apple and lemon. So there are various flavors that you can choose from.

There are only two chain stores that can officially sell alcohol according to the law, these are African + Eastern and MMI. To be able to buy alcohol in this shop you need to have an alcohol passport, a so-called “Red Card”.

The stores of MMI and African + Eastern can mostly be found in or next to a Spinneys supermarket, you can find them in the Mall of the Emirates, Ibn Batuta Mall (Andalusia area), Al Safa (in the Spinneys), the Marina Walk. in the Dubai Marina (next to the Spinneys) and the Jumeraih Beach Road (next to the Spinneys). You recognize the stores fairly quickly because the windows of the shops are sealed so that Muslims have no view of the alcohol bottles when they walk past. Check the website of MMI and African + Eastern for more information about all the locations of the stores. 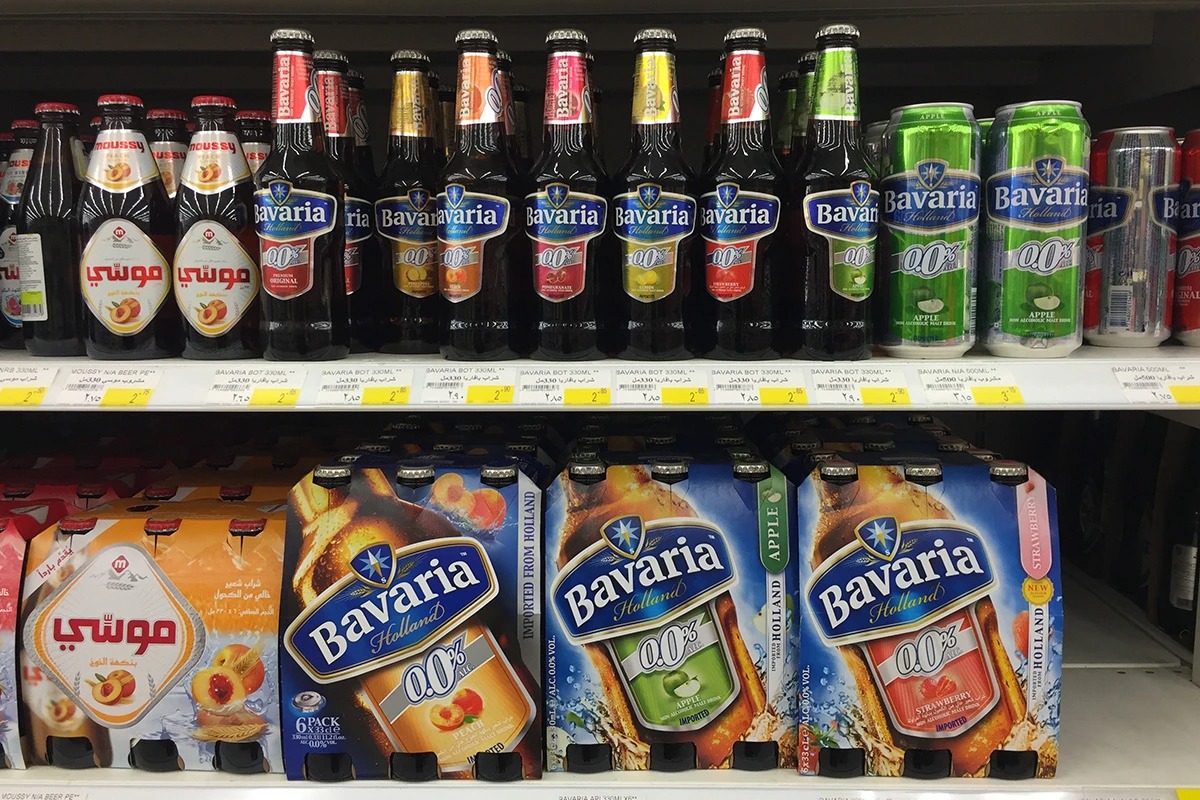 Do you not have a Red Card alcohol passport and would you still like to buy alcohol in Dubai? Then you have to buy a bottle of alcohol on arrival at the airport. At both Dubai International Airport and Al Maktoum International Airport you can buy alcohol in stores before and after customs. The range of alcohol at the airports is huge and almost all famous brands of beer and liquor such as Heineken, Fosters, Bacardi, Johnny Walker and Smirnoff are available.

If you are in the mood for a glass liquor, wine or beer and you have not bought anything at the airport, then you can go to a large number of clubs, cafes and restaurants in Dubai that have an alcohol license. These are mainly the popular clubs and bars in Western hotels. Keep in mind that the alcohol in the nightlife in Dubai is quite pricey. In terms of price you can expect rates from 8 to 10 dollar for a glass of beer and an average of 10 dollar for a glass of wine.